Finally, after nearly two years of talking about it, and trying to cajole Texas A&M University School of Law to reissue degrees reflecting our law school’s new name, we have filed our Original Complaint and Appendix in the Northern District of Texas federal court to force the issue.

TAMU School of Law has changed its name. It has replaced the new name on its signage, on its website, its reports to the American Bar Association, and nearly every place it can. But it refuses to complete the name change on its pre-acquisition graduates’ degrees.

This refusal is wrong, as TAMU School of Law made the decision to purchase an existing school that had graduates, rather than start a new one. (The legal term for this is estoppel, which is Latin for “you can’t have your cake and eat it too”). Texas A&M University could have built its own law school for something like $200M. Instead, it purchased Texas Wesleyan University School of Law for something like $60M.

A&M made that decision for a number of reasons, including the fact that TWU School of Law was fully accredited, and by purchasing TWU’s school, TAMU School of Law could then say with a straight face that it was accredited in 1994. Admissions officers can point to bar results extending into the past, before the school was purchased. Third parties will blur reality and report historical bar pass rates as though TAMU School of Law graduates were taking the test even before its acquisition. Recruiters can point to pro bono involvement of the law school to show connection with the community. There are success stories of alumni that the school to which they can point. There are employment statistics to help sell the school as successful. All these benefits, and TAMU saves $150M and years of time!

Except that it leaves the preacquisition graduates in a lurch. What should be mundane tasks turn into more complicated ones. You want to sign up for an LLM (advanced law degree), you have to choose the school where you earned your J.D. Sorry, your school isn’t there: 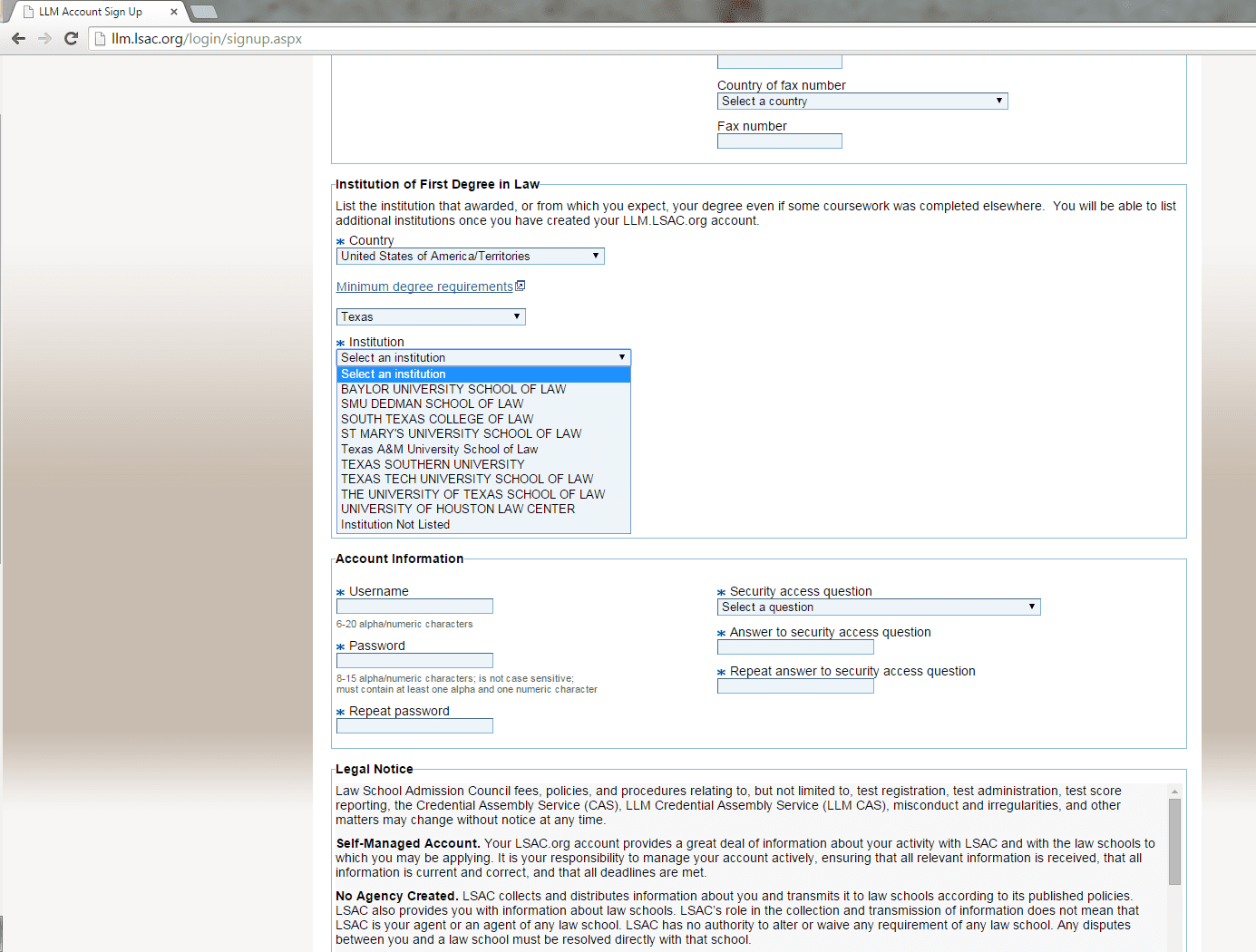 There are many other issues that come into play. People trying to fill out resumes on automatic faculty recruiting sites have to figure out how to explain away the fact that their law school doesn’t recognize them as their alumni, even though it is clear that the school was simply purchased and renamed, just as the Prospectus said when TAMU and TWU were telling the accrediting institutions how they would handle the purchase:

And then the American Bar Association agreed that this would not be a new law school:

Snipped from the August 12, 2013 letter from the ABA to TAMU and TWU, approving the sale of TWU School of Law to A&M.

Of course, not all TAMU subsidiaries do it wrong. Texas A&M University-Texarkana reissues diplomas when its pre-acquisition graduates just fill out a form. And other schools have done it right; it’s not that hard. TAMU School of law will attempt to explain this away by pointing out that Texarkana was fully assimilated, whereas TWU still exists. This is a meaningless distinction; if that logic is right, TWU could go bankrupt one minute after the sale and then the preacquisition graduates of TWU School of Law would have no claim whatsoever on the law school that is using its statistics and accreditation daily. If that logic is correct, TAMU School of Law has no duties whatsoever to the preacquisition graduates right now, and the support it is currently giving is just because it is being generous – a far cry from the support promised during the ABA and SACS approval process, when the school said “The merger will also benefit TWUSL, its students, alumni, faculty, and staff.” (Emphasis added.) I don’t know, but I don’t see the benefit to pre-acquisition graduates that the buyer of the school is a huge and powerful institution if its first act is to scrub the world clean of its previous name in some sort of frantic Roman rite of damnatio memoriae.

The problem here is that TWU was so eager to collect the cash that it really didn’t live up to the expectations that every graduate has when attending every educational institution. No one has to ask, “Are you going to answer the phone when my prospective employer calls to validate my degree?” All college admissions officers will brag about how much support their graduates receive after graduation. There is no ambiguity about the expectations graduates have when entering a college. In the legal world, we call this an implied contract, or contract-in-fact. People will also refer this kind of thing as an industry custom. Normally, one does not need to sue his alma mater to force it to remember he exists. With TAMU School of Law, pre-acquisition graduates are inundated with opportunities to give to the law school, and even put it in our wills. But hey, don’t ask us if you are a graduate!

TAMU School of Law was accredited in 1994. That’s what the school claims. I am hopeful that this dispute can be resolved without a long and tortuous suit lasting years. But let it not be said that we did not communicate the problems long ago, and the answer has been silence. Not what one would expect of the Aggie tradition.

It’s a name change. That’s all.