Here's the short version, where is the police report found that Briana sent the racist texts to herself:

And here is the long version of the story, with all the details:

On Independence Day of 2020, Cali Campbell posted a picture of herself with her boyfriend.

This is the actual image that triggered Briana Breedlove. 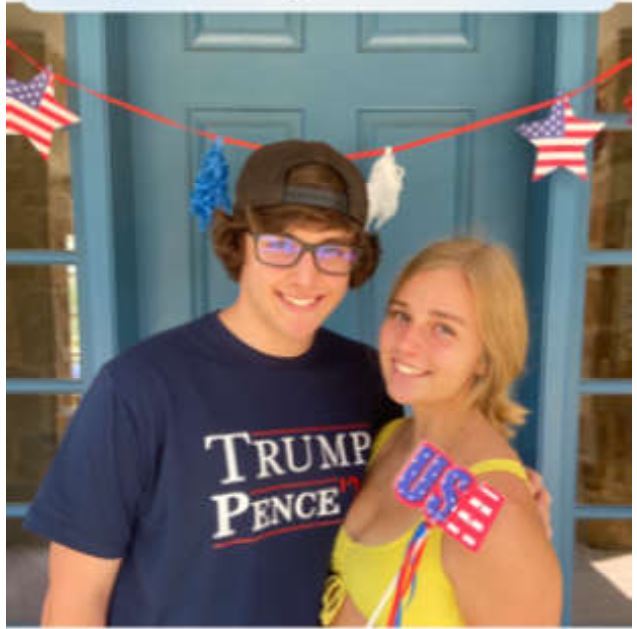 Briana Breedlove, a high school classmate, responded to Cali's photo. Cali did not respond, but her sister Jaci responded to Briana and the two of them had a discussion about racism. Briana decided to air her thoughts on the matter, posting this video on Snapchat on July 6.

Based on this video, Briana was picked up for making a terroristic threat on July 25, when she spent a night in jail and bonded out the next day. The image below shows the bond records for Briana for both this incident and the next.

After Briana left the jail, she later reported to police that she had received a number of racist texts. The police report recounts the conversation. 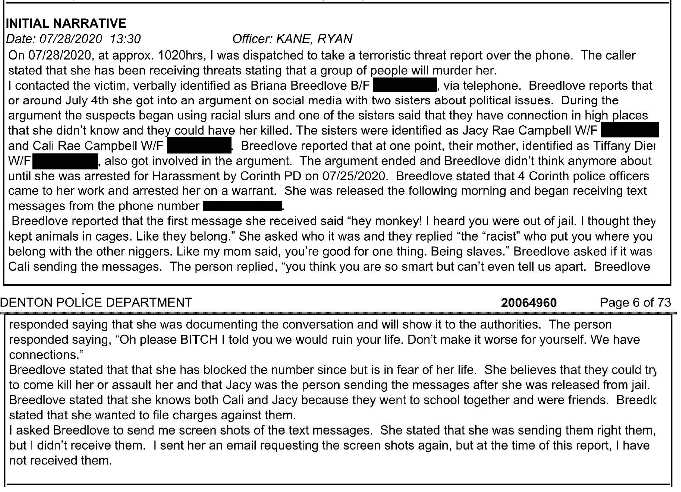 On July 31, a police detective visited with Briana at her grandmother's residence. The detective's report is extensive, and includes a request for Briana's cell phone, as well as the identification of her Snapchat and Instagram usernames.

Based on the discussions with Briana, the detective sought Snapchat records for the Campbell girls and Briana. During that process, he determined that the -6174 phone number (the rest was redacted when we received this documentation) that Briana reported as the source of the racist texts was associated with Pinger, a phone application that allows easy manipulation of its identification process. 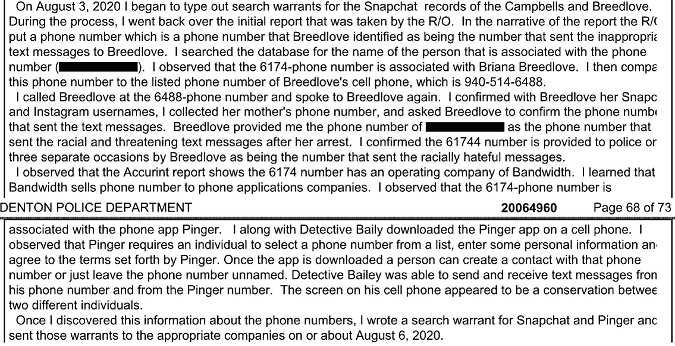 If you didn't catch the above, a person can use Pinger to fake a conversation between himself and whoever he wants. The detective then sent a warrant to Snapchat and Pinger.

The police report goes on to discuss the police's visit with the Campbell girls and their family. Summarizing, they denied sending any of the racists texts.

The detective contacted Briana and asked her to turn over her phone.

After expressing a bit of frustration that Briana is not cooperating and her attorney is also not cooperating, the detective obtains the cell records for Briana's cell phone carrier, and then begins to put it together with the results of the Pinger warrant.

From the above, the detective could see the messages sent by the Pinger application, the email address attached to it (redacted before I got this...I don't have it), and see that "jacycampbell216" was the username the account used.

The detective sought to obtain information from Apple, but Apple responded that it could not identify a user. Google was also unable to help. The detective then recognized that Briana was not cooperating in the investigation, and then sent for her Instagram account, and also to Charter for the IP information used by the Pinger account.

The person sending the texts and using the Pinger account was doing it from Briana's grandmother's residence. 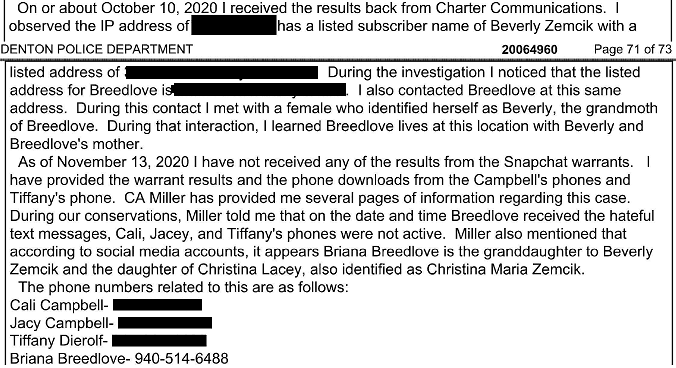 The report then includes information from a crime analyst, who finally received Briana's Snapchat information and reported to the detective that the IP addresses for Briana's Snapchat use matched the IP addresses for the mysterious Pinger text messaging program, all of which matched Briana's grandmother's home, where Briana apparently lives or spends a lot of time. You may recall that Briana gave her police report at this residence.

The detective then proceeded to contact Temani Adams, who is representing Briana, who turned herself in when a warrant was actually issued.

I have left a lot of the details out of this narrative, but I've attached the relevant pages of the report so you can read it HERE.

I have also provided a copy of the affidavit supporting the arrest warrant HERE. (It's a good summary of these events without the technobabble.)

Briana Breedlove obtained a phone with Pinger on it, used the phone from the same IP address she was using with her regular phone to send Snapchat messages, which was her home network.

I have received substantial negative feedback from the supporters of Briana Breedlove, all of whom appear to not really care if the racist texts were real or not. Some of the communications suggest that we must "need the money" to be involved in defending against such accusations. That belief assumes guilt, which no one would want for themselves.

I believe in equality for all, and that belief means that everyone should have representation. Additionally, an actual dedication to eradication of racism must include a dedication to ensuring that outrage be placed accurately, and not just used to browbeat one's political enemies. Cancel Culture is wrong.

No one at Norred Law knew the family or had any connection with the Campbell girls before this began. No one in the family is a law enforcement officer or is using connections to do anything improper.

No one is responsible for Briana's time in jail besides Briana. I have sympathy for her; we all made mistakes when were young. But Briana is an adult now and she knows that her actions are damaging and continuing to damage innocent people who have never done a thing to her. And every time she has the opportunity to fix it, she instead chooses to allow her mother, her friends, and other wild-eyed Cancel Culture leaders to just continue with a campaign of destruction. Nothing excuses the deliberate actions taken to ruin a family's ability to earn a living or encourage death threats.