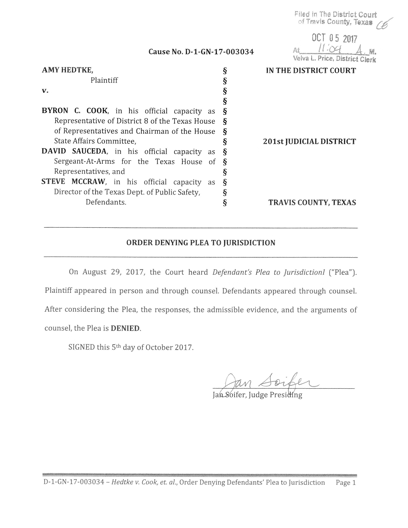 Today, this October 5th, 2017, an Austin district court denied the Plea to Jurisdiction filed by Byron Cook, the Department of Public Safety, and the House Sargeant of Arms David Sauceda.

Filling in the details, government agencies are often immune from lawsuit, the exceptions based on the deliberate wording of statutes and the content. In this case, the defendants (all of whom are parts of the state government) argued that they have sovereign immunity for suits based on the Open Meetings Act, as that law is designed for and effectively only against government entities.

Rep. Cook and his fellow defendants have claimed that the Texas Constitution, Art. 3, Sec. 11 trumps all state law, as it says that each legislative chamber governs by the “rules of its own proceedings”, and thus provides an additional layer of sovereign immunity against state law. To that argument, we pointed out that Attorney General Jim Mattox stated in Attorney General Opinion JM-122 says, “In our opinion, the term ‘rules of its own proceedings’ must be construed narrowly to apply only to matters of procedure.” We also pointed out that Attorney General John Hill’s Advisory Letter JH-84 (1974) includes an assumption that the Open Meetings Act limits the behavior of state legislative committees. The Texas Legislature has had 40 years to exempt itself but has never gotten around to it…presumably because political watchdogs would have great fun by a legislator who claims to support transparency while exempting his own actions.

Trial in this matter is set for October 16th. The parties have agreed to move it to October 31st, but it has not yet been reset. The appeal of the injunction itself has been effectively delayed somewhat as we all agreed to allow the defendants to file their brief near the end of October.

The trial court’s denial of the plea to jurisdiction means that Rep. Cook and the other defendants have to decide if they are going to appeal now, or go to trial, risk losing, and then appeal.

You can ask your friends in the Texas state representatives if they support the idea that they are immune from any duty with regard to the Open Meetings Act. (And if they claim immunity, ask them why they bother with the Open Records Act, which has the exact same argument.)

Your support of this endeavor is welcome, and you can do so by going here.