How to Oppose Petition-Driven Charter Amendments the Wrong Way

I'm writing this blog post to ensure that the residents of Arlington understand our firm’s representation of Zack Maxwell in Maxwell v. City of Arlington, et al., cause no. 352-301689-18, currently before visiting Judge Jeff Walker.

In this case, Mr. Maxwell is challenging Arlington's attempt to steal the wind out of the sailboat named Term Limits by unfairly dropping a bigger boat right in front of it at a crucial point in the race.[1]

This case is about following state laws and city ordinances, and not about term limits, though the obvious truth is that the petition-driven term limit proposal winds up being the winner.

First, let's speak generally about the state law[2] that governs the two ways that charter amendments can happen. First, a city council can simply go through the usual steps to pass an ordinance and place a proposed charter amendment on the next general election ballot. This means that any one of our city council members could move for term limits to be on the ballot during any regular meeting. (Strangley, one of our council members who voted for term limits last week could have suggested that the council tackle the issue the first year that she was elected, which was in 2000. If she wanted to discuss this topic, she's had ample time!)

The second method involves citizen activists, who must put together a petition and get the signatures of five percent of the qualified voters. If they follow a set of fairly stringent rules, a city council must place their proposed charter amendment on the next general election. The Texas Supreme Court has commented that they "become in fact the legislative branch of the municipal government."[3]

There are a few caveats. The most relevant one is that a proposed charter amendment may not contain more than one subject. In our case, we successfully argued that Arlington attempted to put two subjects, the number of maximum terms and an extension of length, improperly into one amendment.

But we're not done. The City's charter has an impact on the process as well. One of the interesting issues is that the state law effectively tells city councils that they must place the petition-driven charter amendment proposal on the ballot, but not how. Texas state law does not care whether a city council has to perform one reading, two readings, no readings, or votes or not - once the number of signatures is certified, it's game over for any opposition from the council, which must put the measure on the ballot. In the legal world, it's called a 'ministerial act' in which a government actor has no choice but to do what he's told.

Some cities may have a special procedure for such charter proposals, but most do not, because this kind of thing doesn’t happen often, and city councils have huge corporate egos which do not want to recognize that the state tells them what to do. Most cities do what Arlington does in situations like this - the council presents the ordinance to put a proposed charter amendment on the ballot as though its council members are the drivers of the proposal. Mayor Williams explained this a bit in the August 7th meeting, telling his fellow council members that they had to vote in favor.

To pass any ordinance, the council must read the amendment at two meetings, known as the "Two Reading Rule" as stated in Section 10 of Article VII of the Arlington City Charter:

[1] Strained analogies are kind of my style.

But the city's current charter also has what we can call a "One Subject Rule" at Section 8 of Article VII, which says that any ordinance can only have one and only one subject:

To pass an ordinance, the Arlington City Council must follow these rules, as well as the Texas Open Meetings Act, which requires a 72-hour minimum posting times regarding a meeting before it may be convened and notice of the agenda.

The Term Limit Petition, Part I (A New Hope)

In the present case, Zack Maxwell and his allies followed the rules and gathered more than 11k signatures to place a six-term maximum for council members and another six terms for a mayor, and then an individual is finished with his time on the council. We'll call this the Citizens' Amendment, which was listed as follows on the August 7th agenda like so:

No part of the agenda indicates to a reader that the Council may be considering the length of council members’ terms in any way or any other ordinance. Rather, the reasonable reading of the agenda item indicates that the Council is doing exactly what is required of it in order to move the petition-driven proposed amendment through the required process so it can appear on the ballot in November, just like the Council is required. No casual reader would guess that anyone is going to talk about lengthening the council terms or adding nebulous tax levy clauses to the ordinance.

On August 7th, the Council performed its first reading of the Citizens' Amendment, just like it was required to do in order to put the proposal on the November 6th ballot. Again, there was no reading or notice of any amendment which might impact the length of terms or any tax levy issue that we will discuss later. BUT council members did discuss various other proposals, a pretty clear violation of the Open Meetings Act. I've been going to city council meetings and participating in city council meetings for nearly 30 years; I've never seen someone so exhaustively hammered as though he was an enemy of the state as Zack Maxwell was for more than 30 minutes. You can watch it here.

The Term Limit Petition, Part II (The Empire Strikes Back)

Amazingly (okay, not really amazingly), more than a hundred movers and shakers in Arlington showed up on the evening of August 7th in what was clearly a contrived and well-organized show of support of passing anything but the Citizens’ Amendment. People who had never spoken in favor of term limits were suddenly concerned and hopeful that the council would immediately do something.

And so the Council “listened” to the “people” and came up with this new agenda for the Special Meeting to be held on August 14th, posting it on August 11th (inexplicably on Saturday afternoon, near the absolute 72-hour deadline dictated by the Open Meetings Act), the Council released its agenda for the Special Meeting on August 14th, which includes what it is calling a final reading of the ordinance. An excerpt of the relevant portion of this agenda is reproduced here, with the original language outlined in yellow: 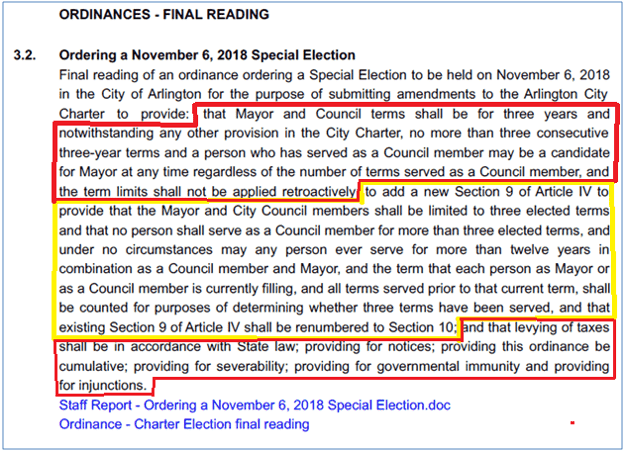 Note that the original language is buried in the middle. (Yes, it is well-established that the city council can put these in any order they wish.) If the Council got away with this, it would mean that there would be three issues on the ballot, and the first one is the preferred less limiting version of term limits.

However, this August 14th meeting was the first time that anyone had discussed the length of a term. How can it be a Final Reading, as it is titled, if it has never had a First Reading? This was issue number one.

How can this possibly be considered a one-subject ordinance? It cannot.

How can the first version of the term limit charter amendment be considered one subject, when it discusses both lengths of terms and number of terms? Arguable, but certainly the stronger answer is that these are two different things.

The Court steps up, granting a win-ish to Term Limits.

This was the basis of the requested temporary restraining order and mandamus, which after two hours of hearing on Wednesday, was granted by Judge Walker.[1]

During the hearing, I argued the legal side. One important point that comes up later – once a city has called an election, courts don’t like to get involved, typically waiting until after the election and then allowing the suit to contest the results after the fact. To argue against that option, I had to point out that the City could pass the ordinance it wanted, and could correct its error. Otherwise the court might just deny our remedy. Nor do I like the idea of just waiting. The lack of a suit and the lack of the resulting shine on the situation would most likely result in the City just winning, and the Citizens’ Amendment just losing, and the election contest would be an uphill battle.

In any case, Judge Walker agreed with our side and granted the rather strong TRO, shown here. It prevents the City from doing anything more unless it broke out the different subjects and had multiple reading for each subject, starting from scratch.

The City complies with the TRO but figures it out.

For a while, it did not appear that anyone knew how to get past the usual rule requiring 72 hours between meetings, but in retrospect, they probably figured it out pretty fast, as most of the city’s seasoned leadership was on the side of continued and unending rule, surely someone made a phone call and said, “Wake up…this isn’t that hard.” All it takes is for the Council to vote by a 2/3rds margin to suspend their usual rules requiring 72 hours between meetings.

The Council posted two agendas yesterday (8/16/2018) that it is going to hold two special meetings, one on Sunday the 19th and Monday the 20th, thereby getting the deal done just in the nick of time to meet the deadline to have its proposals on the ballot.

Completing this stage of the game for the City means having all of the council members show up on Sunday to vote to suspend the rules, and then all of the council members have to be there to vote to dispense with the rule that requires them to have at least one of the readings at a ‘regular’ meeting, because both the Sunday and Monday meetings are ‘special meetings’.

The Intermission and Finale

In patent law, we talk about the ‘long wait’ as the period of time between filing an application and getting the first attention from the Patent Office. We’re going to have that in this case, as the next legal step will depend on the election results. What happens if both proposals pass?

Government bodies can and have put forth contradictory charter alternatives, but when they do that, they typically have language in them that says, “If both this alternative and the other one both pass, then this one wins.” We don’t have that, and should not, as the Council should not be able to say that its version supersedes the Citizen’s Amendment. And if the Council’s version wins and the Citizens’ Amendment loses, then I might be able to argue in an election contest after the election that it should not have been even allowed. But the bottom line is that such a thing has never happened.

All the pertinent documents are attached below for your enjoyment. And good luck to both sides as the campaigns begin their efforts. The City wins when citizens are engaged, and for that, I consider this effort to be already a huge success.

[1] The case was originally assigned to Judge Burgess in the 352nd, but he recused himself, asserting that some might question his neutrality, presumably because of previous ties to Arlington or various people. Judges do that from time to time. Then it bounced to Judge Evans because he’s the administrative judge covering these matters, and he opted to assign it to Judge Walker, who is still handling it in the 352nd District Court.